Hi there. This next guest post comes from me and is about one of my favorite fiction authors who recently passed away. I wanted to write this article to share some of my thoughts about Harlan Ellison and recommend some of his works.

Harlan Ellison (1955 – 2018) was a truly incredible and prolific author. In his lifetime, he wrote more than 1,700 short stories, 75 novels, and several screenplays for television and film. He has won many awards for his work and also organized many fiction anthologies that helped to introduce talented writers to the mainstream. 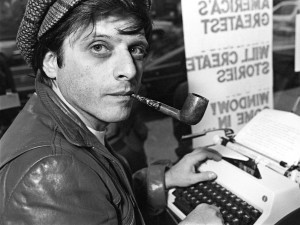 Ellison was also an avid and ferocious activist for many causes. He participated in the 1965 Selma to Montgomery marches with Martin Luther King Jr. and was also seen picketing during the Writer’s Strike of 2008. He had a fiery personality and was quick to anger, especially in the face of injustice. His presence in the world was unmistakable, and his absence is unfathomable.

For those of you who are interested in learning more about his work, here are some of my personal recommendations:

Although he wrote several novels, most of Harlan Ellison’s written work took the form of short stories. These stories often fell into the realm of science fiction, or ‘speculative fiction’ as he liked to call it, and are collected in many anthologies. Two of my personal favorites are Troublemakers, a collection of stories about people who are up to no good, and Gentleman Junkie and Other Stories of the Hung-Up Generation, which contains stories about discrimination and prejudice. 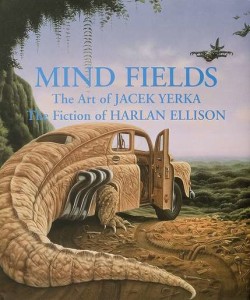 Another collection of stories that I highly recommend is Mind Fields. This book was made in collaboration with Jacek Yerka, a Polish painter who creates vivid surrealist art. This is a huge book that contains beautiful drawings accompanied by stories from Ellison describing them. It’s a fantastic collection of art perfect for any coffee table and it includes one of my favorite stories he’s ever written, named after his wife Susan. You can read that story on his website here.

Harlan Ellison wrote exactly one screenplay that turned into a movie. Called The Oscar, he claimed that the studio butchered it so badly that he disavowed it, choosing to be credited under the pseudonym Cordwainer Bird. Aside from that, he’s written several teleplays that went on to become episodes for popular TV shows.

One of his best and most popular teleplays was for the Star Trek episode “The City on the Edge of Forever,” which won him a Hugo Award. My favorite of his teleplays is from an episode of The Outer Limits called “Demon with a Glass Hand,” about an amnesiac time traveler with a computer for a hand. You can find the episode on Hulu and I highly recommend doing so.

Ellison was also the subject of a documentary made in 2008 about his life and work called Dreams With Sharp Teeth. I make it a habit to rewatch this film every year or so because it offers a fascinating window into his history and home life. It’s difficult to find a clip of it that isn’t laced with profanity, but here’s the best I could manage:

I could listen to Harlan Ellison wax on forever about fiction, religion, philosophy, politics, or what he had for lunch. He was the reason why I decided to be a writer and I regret that I never got the chance to meet him while he was alive. That said, I know that he will live on in his words and in the words of modern science fiction, which is substantially in his debt.

Thanks for reading and feel free to recommend other Harlan Ellison stories in the comments. 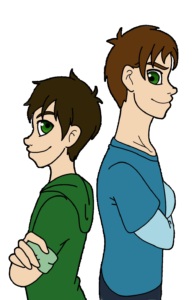 Let’s keep in touch! Become a member of our mailing list to find out about new articles, guest posts, and book releases. No spam, we promise!